Jesus – Son of God! An explanation for MuslimsBy The Publishers · 10 min read 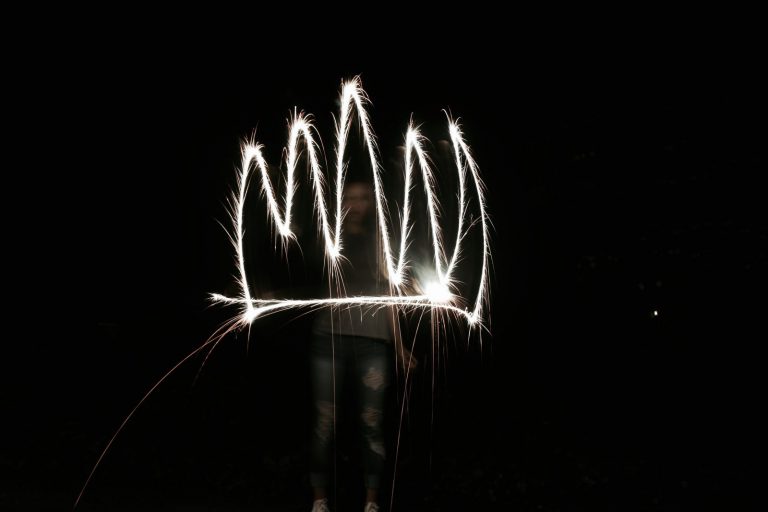 ‘If thou wert in doubt as to what We have revealed unto thee, then ask those who have been reading the Book from before thee….’ (Surah 10, Yunus, verse 94)

‘How can Jesus be the son of God?’ This is probably one of the most asked questions coming up in discussions Muslims have with Christians. Having heard answers of Islamic scholars beforehand even the thought of it seems blasphemous. There is a problem in such an approach. Do we seek answers to a computer virus from a medical doctor? No! Similarly, questions about Christian teachings should be addressed to practicing Christians. Knowing their subject they will be able to explain the real meaning of Biblical teachings. Below you will find the Biblical, Christian answer to your good question.

Christians do not believe that Jesus is the son of God in a physical sense. God forbid that he should take a wife! That would be blasphemy. However, they do believe that Jesus is the Son of God in a figurative sense. Arabs, for example, are commonly known as ‘sons of the desert’. Nobody would ever think that the desert would have given physical birth to them. No, the term has to be understood in a figurative, metaphorical sense. Arabs know the desert in and out; they are one with it. That is why they are called in such a way. The Quran calls a wayfarer a ‘son of the road’, ‘ibn as sabeel’ (Surah 2, Al Baqarah, verse 177) and Satan’s followers his children (Surah 18, Al Kahf, verse 50). The Arabic word ‘ibn’ is sometimes used in a figurative sense as opposed to ‘walad’ which is always used in a physical way. In the Quran the latter is used when a protest is brought about ‘Allah having taken unto himself a son’ (Surah 2, Al Baqarah, verse 116). It shows clearly that the Islamic denial is directed only against the physical, not the figurative sonship of Jesus. Here the question must be raised, ‘Why did Allah not speak against the figurative concept of Jesus’ sonship held by the great majority of Christians at all times?’ Let us now investigate the true Christian doctrine of Jesus being the Son of God in more detail.

3. WHY CHRISTIANS CALL JESUS THE SON OF GOD

A. He is one with Him in essence.

Besides having many other titles, such as ‘Messiah’ or ‘Son of man’, he calls himself ‘Son of God’ because he knows Him in a profound way. Jesus is the Eternal Word who has always been One with God. (John 1:1-18; Philippians 2:5-11) Similarly, the Qur’an calls Jesus the Word of God and the Soul, the Spirit of God (4:171,172). Just as a person is forever one with his words, spirit, and soul, so God and Jesus Christ are eternally One.

Philip said, ‘Lord, show us the Father…’ Jesus answered: ‘Don’t you know me, Philip, even after I have been among you such a long time? Anyone who has seen me has seen the Father…Don’t you believe that I am in the Father, and that the Father is in me?’ (John 14:8-10)

Jesus has God’s holy and sinless character and his mighty attributes. The Qur’an calls him ‘a holy son.’ (19:19; 3:46). While it speaks of the other prophet’s need of forgiveness (38:24; 48:1), it never attributes a single sin to Jesus. Also, it uniquely ascribes supernatural powers to him that God alone possesses. (3:45-51; 5:110-112) Like Father, like Son. (Hebrews 1:1-9; Matthew 17:5) In ancient Jewish customs, the firstborn son also represented the father and was regarded as being equal to him. When Jesus used this term publically for himself in the Gospels, the Jews were absolutely certain that he claimed to be God. In his official trial by the Sanhedrin, this was the very charge brought up against him: Blasphemy. He claimed to be the Son of God and in that, he made himself God. (John 5:18, 19:7)

C. He came from God.

Similarly, the Qur’an teaches that Jesus came directly from God, that He was born of a virgin, that He had no earthly father. (3:47; 19:20). Unlike Adam, who was formed from dust, the Messiah came from heaven. In the Quran Jesus too is set apart from all other prophets by calling Him the Messiah which means ‘the Anointed One.’ (4:157,171,172)

Because God is so much greater than man, He chooses to express Himself in human terms so that we can understand Him. When Surah 22, Hajj, verse 61 says that Allah sees and hears, it does not mean He has ears and eyes. Rather He is expressing a truth in a way we can understand He is All-knowing. Similarly, behind the title ‘Son of God’ is a profound truth expressed in human terms. The Bible calls a number of people ‘sons of God’ but Jesus is addressed as such in a particular way:

‘For God so loved the world that he gave his one and only Son that whoever believes in him shall not perish but have eternal life.’ (John 3:16)

The Greek word for ‘one and only son’, ‘mono-genes’, means literally, ‘one in kind, unique’ and has sometimes been incorrectly translated into English as ‘only begotten’. This rendering is wrong because ‘Mono-genes’ is also used in Hebrews 11:17 to describe Isaac as Abraham’s ‘one and only son’, namely the one who was promised by God to Abraham and his wife Sarah. (Genesis 15) Since Ishmael too was Abraham’s son, but through his servant Hagar (Genesis 16), the term ‘one and only’ distinguishes Isaac as being unique in his kind but not as the only begotten. Furthermore, the Hebrew word used to describe Isaac in the Old Testament story as ‘only son’ in Genesis 22:2 is completely different from the word ‘begotten’ used, for example, in Psalm 2:7:

I will proclaim the decree of the LORD: He said to me, ‘You are my Son; today I have become your Father (or, I have begotten you).’

‘In the ancient Near East the relationship between a great king and one of his subject kings, who ruled by his authority and owed him allegiance, was expressed….also by ‘father’ and ‘son.’ (N.I.V. Study Bible, Zondervan Bible Publishers, USA, 1985, footnote) Acts 13:33 applies Psalm 2:7 to the relationship between God and Jesus in a filial not in a carnal sense. It refers to a prophecy that was fulfilled when Jesus rose from the dead. Just as other people are called ‘one and only sons’ in the Bible because of their uniqueness in some ways, Jesus too is called exclusively ‘one and only Son of God.’ On a number of occasions he made statements to prove this fact:

Jesus did many other miraculous signs in the presence of his disciples, which are not recorded in this book. But these are written that you may believe that Jesus is the Christ, the Son of God, and that believing you may have life in His name. (John 20:30,31)

The destiny for us who are living in the time of the New Testament is dependent on our relationship to Jesus. The New Testament makes it clear that salvation is by faith through Christ alone:

‘That in the time to come he might make clear the full wealth of his grace in his mercy to us in Christ Jesus: Because by grace you have salvation through faith; and that not of yourselves: it is given by God: Not by works, so that no man may take glory to himself. For by his act we were given existence in Christ Jesus to do those good works which God before made ready for us so that we might do them.’ (Ephesians 2:7-10)

Salvation by faith in Jesus is believing with the intellect that the Bible is right about our sinful condition, about who Jesus is and about what he did on the cross for us. Passages that speak about judgement according to works have to be read in the light of what true faith means. This is confirmed when their immediate context is considered. (e.g. Joh 5:28-29, compare with verses 23-24, Mat 16:27 with verses 21-26, 25:31-46 with 23:37-39, Jam 2:14-26). As the German reformer Martin Luther used to say ‘the faith that saves is never alone.’ True faith in Christ shows itself in four ways:

1. Out of thankfulness followers of Jesus do what he tells them: To love God and man. This is the essence and test of true obedience. They desire to follow the moral law set out in the Old Testament and summarized in what is known as ‘the 10 commandments.’ (Exo 20:1-17)

2. Genuine faith in Jesus produces a desire to become more like him, to do what is right and just.

3. Saving faith creates the awareness that this new obedience can only come through faith in Christ. It does not come from focusing on the law, the desperate attempt to meet its demands. Instead it comes from continually fixing one’s eyes on Jesus and his work, by remaining connected to him through being in his presence with one’s thoughts.

4. Lastly, Biblical faith generates a constant abiding in and reliance on Jesus by faith. In this way only the Holy Spirit of God supplies the power for a changed life and lasting fruit. (Rom 8:13, Joh 15:5)

Once the misunderstandings have been removed it becomes clear why Jesus is the unique Son of God: He is one with him in essence, he is like God and he comes from heaven.

‘Whoever believes in the Son has eternal life, but whoever rejects the son will not see life, for God’s wrath remains on him!’ (John 3:36)

Do you believe or reject him? Do not give the answer lightly because it is your most important ever! The following story told by Jesus will help you in your conclusion:

‘A man planted a vineyard. He put a wall around it, dug a pit for the winepress and built a watchtower. Then he rented the vineyard to some farmers and went away on a journey. At harvest time he sent a servant to the tenants to collect from them some of the fruit of the vineyard. But they seized him, beat him and sent him away empty-handed. Then he sent another servant to them; they struck this man on the head and treated him shamefully. He sent still another, and that one they killed. He sent many others; some of them they beat, others they killed. He had one left to send, a son, whom he loved. He sent him last of all, saying, ‘They will respect my son.’ But the tenants said to one another, ‘This is the heir. Come, let’s kill him, and the inheritance will be ours.’ So they took him and killed him, and threw him out of the vineyard. What then will the owner of the vineyard do? He will come and kill those tenants and give the vineyard to others. Haven’t you read this scripture: ‘The stone the builders rejected has become the capstone; the Lord has done this, and it is marvelous in our eyes?’ Then they looked for a way to arrest him because they knew he had spoken the parable against them. But they were afraid of the crowd; so they left him and went away.’ (Mark 12:1-12)

The Trinity explained to Muslims 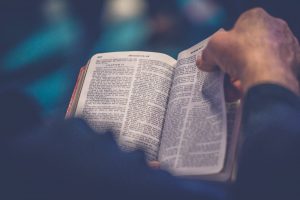 Jesus – God! An explanation for Muslims 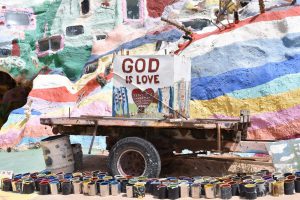